Strength in Corporate Governance: A path to Alpha 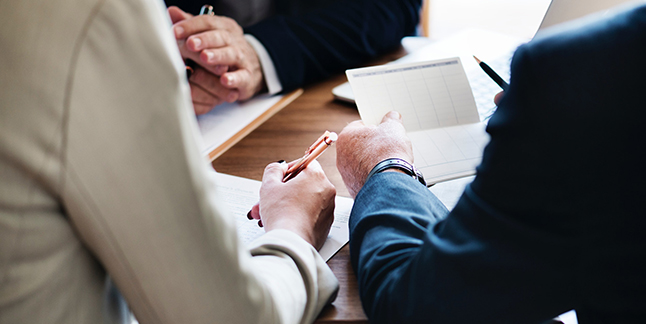 From September 2012 to 2014, Tesco’s stock price fell 43% relative to the FTSE100 and Philip Clarke, the company’s CEO, was asked to leave. The UK’s largest food chain had long been a darling of investors and widely regarded as a safe bet, but some recent developments changed that perception. Contributing to the stumble were some short-term revelations, namely a decline in the company’s like-for-like sales in its core UK market despite a £1 billion turnaround program. But the market was also reacting to disturbing legacy items suggesting that all had not been well for some time. There was a £1 billion pre-disposal write-off on Fresh and Easy, Tesco’s greenfield entry into the demanding US market. It was founded in 2007 but never reached profitability. The company also took an £800m write-down on UK properties which would no longer be needed for large out-of-town stores for which there was no demand.

However, Tesco is not alone. AIG, Citigroup, Intel, Nokia, Orange, Rolls Royce, Target and Volkswagen are all also examples of prominent companies that have at some time in recent years lost their shine and substantially underperformed the market. Over the past decade, about one in five CEOs of top 100 companies in the USA and Europe has either been fired or left under a cloud after the company underperformed the market by 25% or more in their last two years1. This article, based on research results, summarizes observable markers for companies at high risk of stumbling that can be incorporated into the stock selection process.

In seven stumbles, about a sixth of the analyzed cases, CEOs could not successfully lead innovations or reposition to prevent their company’s market falling away or to keep pace with competition. Though comparatively few in number, these included some of the most dramatic underperformers. Looking at these companies from the beginning of their stumbles to end 2016, the end of our study period, shows the dramatic underperformance of many of these companies against comparable companies that more successfully innovated or repositioned. 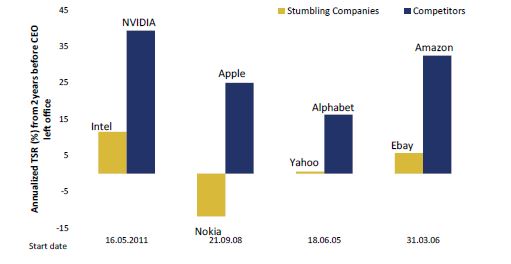 There were early warning signs. Market shares don’t shift dramatically overnight. But companies whose CEOs stumbled were still not able to respond fast enough. For example, Yahoo saw the threat from Google in 2001, but their response to Google’s innovative search and search advertising technologies was ready only five years later in 2006. By then, the battle for market share had been lost. Most stumblers that failed to innovate or successfully reposition under pressure lacked CEOs and top teams with an education and career background to give them the best chance of addressing the key challenges they had to face2. The right career background is not just a matter of having industry experience. For example, Olli-Pekka Kallasvuo had been with Nokia for over 30 years when he became CEO, but he had been educated as a lawyer and his career with Nokia had been mostly in the Finance function. His finance background did not equip him to direct or supervise the extraordinary new product development and technology transformation that Nokia needed in order to compete with Apple’s iPhone.

In twenty three stumbles, a much larger number and about half our sample, CEOs self-imposed a revenue growth challenge. The company’s core business did not offer strong growth prospects, but it was stable and not directly under threat. Rather than simply focus on being good stewards of solid businesses and creating value for shareholders by returning cash, these CEOs chose to take high risks to increase the pace of company growth. They proactively developed ambitious plans that ended up destroying value. Some CEOs went for one, or in some cases several major acquisitions – such as Bank of America’s acquisition of Merrill Lynch or RTZ’s acquisition of Alcan – that were large relative to the size of their company at the time and did not pay off. Some went for risky diversification: they invested in “question mark” businesses – such as BT Global Services or Tesco Fresh and Easy – which would first need heavy investment to transform and grow before strong profitability could be expected; or they diversified outside their “heartland” into businesses and/or geographies – such as iron ore in Brazil for Anglo or Canada for Target – where their corporate management had little experience.

Companies considering embarking on high risk strategies need a strong Board of directors to provide a constructive but tough challenge to the plans of the CEO and top executive team. But nearly half of all stumbler Boards failed to meet basic criteria for a strong Board. They lacked sufficient industry and other relevant experience to be able to ask the right questions, lacked sufficient independence from executive management to be motivated to ask tough questions; and/or were too large for good debate. See below the excerpt from an analytical table on the quality of stumblers’ Boards of Directors. It shows that many lacked sufficient non-executive directors with relevant industry experience.

Fig 2. Quality of Board of Directors (excerpt)

The study on stumbling CEOs provides some insights that can help stockpickers. To avoid putting stumblers in the portfolio, in addition to giving due consideration to a company’s business model, its financial position and strategic development, a great deal of attention should be devoted to its corporate governance and especially to its choice of CEO and other members of the top executive team. Even for a large company, senior leadership is crucial to performance and specific factors should be present: 1)relevant career experience and education of CEO; 2)independent Board equipped with necessary industry experience to challenge and advise the management; 3)sustainable strategy consistent with core business development and top team capabilites.

1 – The study was conducted in cooperation with Felix Barber and Jo Whitehead, Directors of the Ashridge Strategic Management Centre at Hult International Business School;