R&D – A VALUE-DRIVER OR VALUE-DESTROYER? 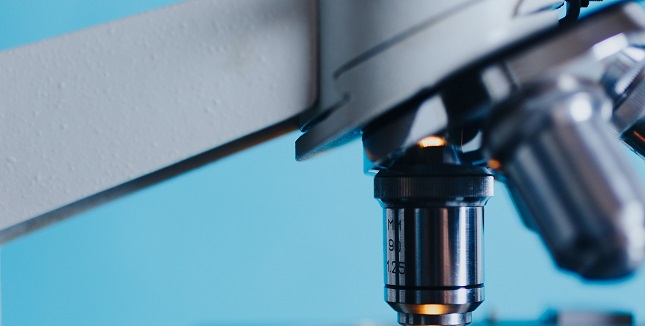 Investors, analysts, competitive landscape – they all require the companies to spend more and more on R&D, to launch new products and new services. And yes, the companies do that, but the results might be frustrating, at least in the shortterm. Take Baidu, once the top Chinese internet behemoth, it has lost its position in top 5 IT companies in China. The reason is straight-forward: huge expenses directed to R&D for development of new services, such as video streaming iQiyi (Netflix twin in China), as well as increase in marketing expenses (over 200 mn USD spent on Chinese New Year) drive the top line, while putting huge pressure on the bottom line. Another Chinese IT giant, Netease, seems to have overcome this problem and now implemented strict cost discipline: its 2Q profit has increased by 45% after it recorded 43% drop last year as the company managed to tame its game development costs.

In Europe and USA we do not see such swings as corporate governance and cost management culture is better developed. But also in these regions the pressure to invest in R&D is pretty high, while often it turns out to be inefficient. Good illustration is Blackberry – a company, which is spending 20% of its sales on R&D, but the returns on R&D are negative as its sales show consistently declining trend: the company generated revenues of 20 bn USD in 2011, but could not even reach 1 bn USD in 2019.

With R&D and marketing expenses there is always a trade-off: to keep them moderate and report nice profit figures, while risking of losing competitive position, or sacrifice short-term profits by investing in product development/marketing to enjoy higher top line growth later. The key to the problem is hidden in reasonable approach to cost management. For instance, Jim Collins1 advises to fire bullets (low cost and risk experiments) to understand what will work and then calibrate cannonballs.

As promised in our May article (link), we decided to examine whether the investors praise more R&D-focused companies, knowing that they provide higher  future profit potential, or rather punish them for not managing costs well.

First, we have split the market universe into four quartiles according to R&D expenses to sales and compared them afterwards based on the total return figures for the last 10 years. The results were somewhat expected: the companies with lowest R&D expenses gained the least as compared to the companies, which fell into two quartiles with highest R&D expenses. The same pattern was seen both, in Europe and in USA.

The explanation could be straightforward: the major R&D spenders are skyrocketing IT and biotechnological stocks, while the main laggards in terms of R&D costs obviously are utility and energy companies, which could not cheer up the investors with decent returns lately.

Indeed, R&D costs are to a great extent sector-specific, so we have compared the innovation leaders and laggards within one sector to get more objective results and prove the hypothesis that the companies, which invest more in an attempt to stay competitive on the market by launching new products and making their processes more efficient, also are capable of generating higher shareholder value in the long term.

We have conducted analysis for the five sectors, which provide sufficient number of R&D costs reporting companies, by comparing the performance of top 25% by R&D/Sales to the bottom 25% R&D spenders since 2008. 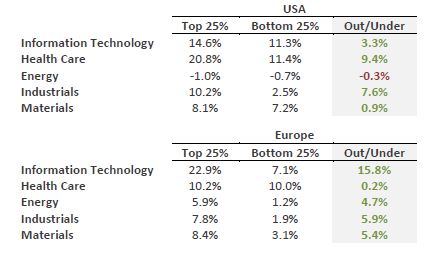 In general, it could be stated that higher R&D costs translate into higher stock returns. The correlation is particularly applicable to R&D-intensive sectors such as IT and health care (exc. healthcare in Europe), as well as Industrials. Energy and material sectors in US are not sensitive to R&D expenses, while for the same sectors in Europe higher R&D expenses make the difference.

In our May insight (link), when disclosing the figures on R&D costs of quality companies, it was clearly seen that they are in the top league in terms of R&D and the intangible assets. But, again, partially these figures are explained by the sector bias due to IT overweight as compared to the market. Fig.3 puts R&D spending of quality companies in sectors’ context.

Fig. 3: Median R&D/Sales of quality stocks vs. Benchmark by sectors

The results are not unanimous: it cannot be stated that quality companies are obsessed with R&D, but they still have spending close to the market levels. Quality companies focus rather on sustainable, above average profitability, having strict cost discipline also with regard to R&D expenses.

To conclude, investing in R&D is vital for long-term value creation and staying competitive on the market. However, strict discipline should be applied to this type of costs and the management’s and investors’ attention should care about return on R&D as one of the primary key performance indicators.