Historically, value stocks have been superior to the growth stocks: since 1933, value has outperformed growth in 60% of periods. Tailwind from value recognition probably helped the most well-known value investor W. Buffettto earn his fortune. However, now it seems that market paradigm has changed: the trend reversed in 2006 when growth stocks became superior vs. value, therefore recording the longest secular bull run (Clissold, Nguyen, 2019). To a great extent, it was caused by the unprecedentedly long cycle of low interest rate environment, when every grain of growth becomes valuable.

Before we discuss the reasons of value under-performance in detail, it has to be mentioned that equity markets became much more efficient and sophisticated than they used to be, and if the stock is cheap, then it is cheap for a reason. If stock’s valuation is on a low level, it can be well-explained by the fundamental problems, which undermine or will undermine quality status of the company. Such companies, classified as Dogs according to BCG matrix, often experience business model erosion, which is acknowledged by the market that assigns them a certain discount.

The examples of value traps that we mention here speak for themselves. Bed Bath & Beyond, a clear value company with PE of 13 in 2016 and 6 in 2019, declined 80% since 2016 as the management responded too late with digitalization and eCommerce initiatives. The company has witnessed declining gross and operating margins, declining same store sales and deteriorating trends in free cash flow generation.

Walgreens with PE of 10 also faces troubles with regard to its business model. Since the merger of Walgreens and Boots,the company struggled with comparable store sales growth in North America and United Kingdom, where saturation is already quite high. Additionally, the launch of Amazon’s drug delivery services created pressure on forward-looking growth guidance for Walgreens’ pharmacy stores. 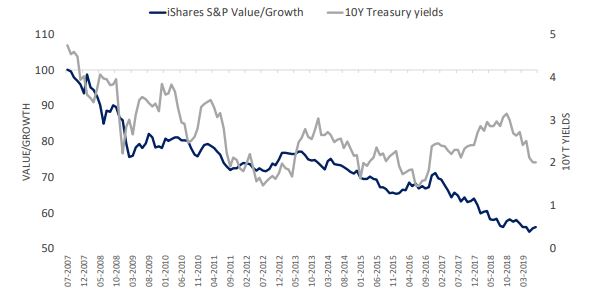 It does not seem that the era of low interest rate environment will end soon, so the supporting factor to the growth stocks will continue to be valid.

The common explanation of the growth superiority over value is sector bias: heavily indebted, slowly growing financial and energy companies prevail in value- tracking indices, while IT companies, hyping on massive digitalization trend and boasting of high development pace, are crowding growth indices. For instance, IT in USA value index has just 7% weight, while in growth index it has 31%.

Fig. 2: Sector breakdown of value and growth indices in USA and Europe

However, we decided to examine how the performance results would alter in case of sector-neutral value and growth indices, respectively calculating TR based on iShares S&P 500 value and growth ETFs that are re-balanced monthly using representative weights in each sector in line with the S&P 500. 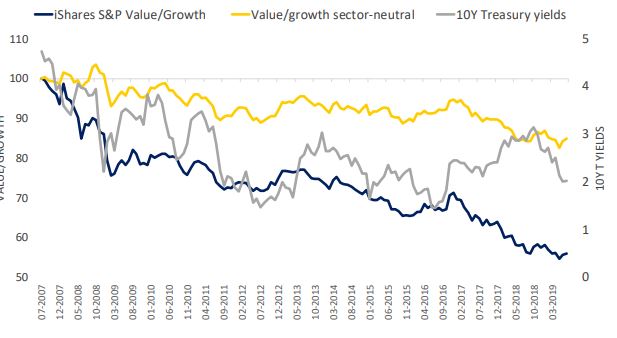 Stock selection within quality pays off

We are, however, persuaded that the stock investing based on valuation level or earnings growth, respectively sticking to growth or value styles, will not be sustainable in the long-term as the growth cycle will be replaced by value cycle and vice versa. To be able to stay in the outperforming league, the best recipe is careful and systematic selection of stocks with performance and risk characteristics independent of value and growth styles. We consider it imperative to select companies, which operate sustainable business models within promising market niches and favorable market environment, have a good management team focused on the long-term value creation and as an addition are attractively valued.