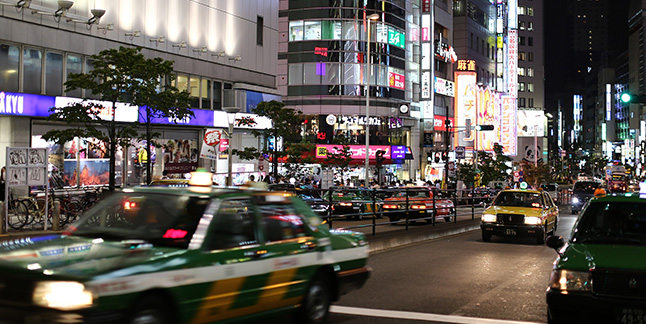 The period of economic stagnation in Japan from 1991 to 2010, following the collapse of the country’s massive asset bubble, is often referred as Japan’s lost 20 years. During this period, Japanese corporations were bitterly criticized for their low returns in comparison to international standards. It took two decades to clean-up their overextended balance sheets. Despite the setback caused by the financial shock in 2008, Japanese corporations continued their efforts to improve the quality of earnings without further expanding their total assets. The ROA has since recovered to 3%, slightly higher than in the US. The ROE of 10% does not look appealing at first glance, but this is mainly due to low leverage. “Be conservative with borrowings” is one of the most critical lessons these companies learned during the lost 20 years.

Japan has the third largest stock market in the world, consisting of 3,500 listed companies. While not all of them are good, there are those that offer outstanding growth perspectives and high quality governance. Such companies typically have a long-term business focus under the leadership of skilful management teams. They tend to spend a high proportion of their sales revenues on research and development (R&D) for long-term growth. 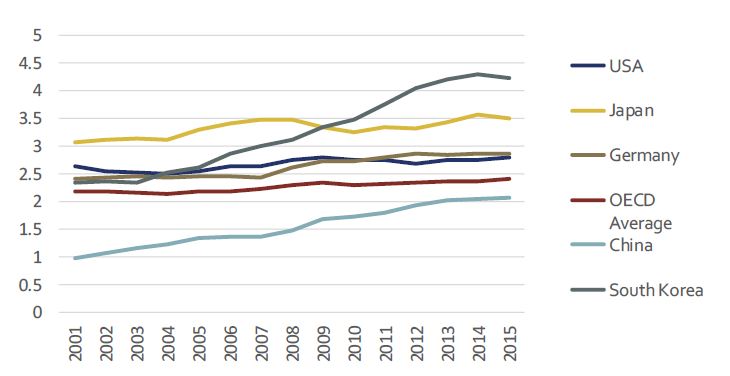 Fig.2. R&D spend as a percentage of GDP

As a result of continuously high R&D spending, Japan enjoys a leading position in the field of innovation and business sophistication. According to the World Economic Forum’s Global Competitiveness Report, Japan has a competitive edge in the following areas:

Toyota, for instance, introduced its hybrid system with the Prius in 1997, and has sold more than 10 million hybrid cars worldwide since, but it started investing in the technology back in 1977. The special ink used in the Frixion Ball, the world’s best-selling erasable ballpoint pen made by Pilot Corporation, was discovered in 1975. It took 30 years for the company to modify and develop the ink to make it suitable for writing materials. Pilot has sold more than 1 billion units of this pen worldwide since 2006.

There are many Japanese companies taking global leading positions in many fields. People use Japanese products every day without even being aware of it; The ball bearings used in the hard disk drive in computers, gallium arsenide nitride which is used in LED lamps, and carbon fiber, a material ten times stronger than steel but just a quarter of the weight, which is used in airplanes and highend cars, are just a few examples of them. And it’s not just products – Japanese culture is also becoming increasingly popular, including food, sports and entertainment. Exports of Bonsai have increased ten-fold over the past decade. Anime cartoons and manga comics are loved by teens across the world.

The key to success is long-term orientation looking beyond the economic cycle. Demand for such leading products is less vulnerable to the prevailing economic situation because there are virtually no substitutes.

Worth taking a bottom-up strategy

Global investors tend to invest passively in Japan (through ETFs or index futures),
seeking to benefit only from its cyclical upturn performance. Because investors highlight the short-term impacts of exchange rates, the correlation of the stock market and the JPY currency is high. However, this is opening up interesting investment opportunities for active stock investors like us. We would argue that investors should look at areas where Japan is strong and actively invest in quality companies. Well-managed companies with competitive products have better pricing power, and are thus less vulnerable to global economic cycles.

A portfolio of such companies could outperform Japanese equity indexes over the long term, as shown in the chart below. For further information please refer to www.hqam.ch 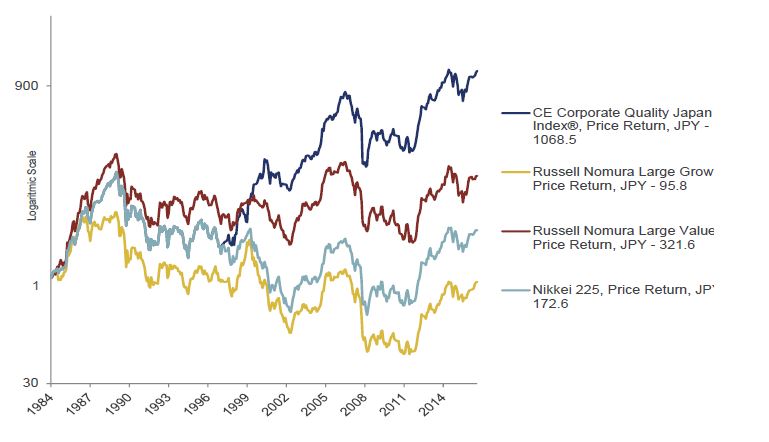