Share Buybacks: An elegant solution to your EPS growth problem 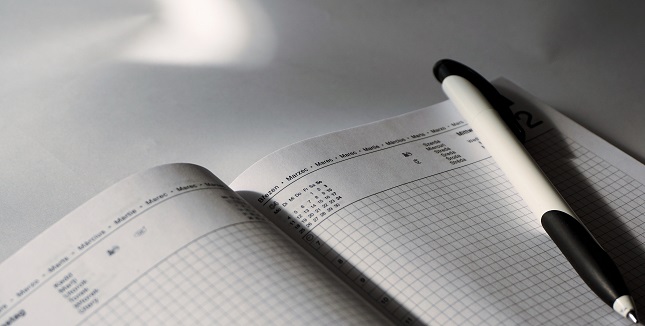 An Enemy or a Friend?

2018 was a year of the ultimate shopping spree for S&P 500 companies, which spent a mind-blowing $1 trillion plus in cash on share buybacks – the biggest amount yet over the course of the last decade. Inherently weak regulatory framework (SEC rule 10B-18) that reduces liability when company buys back common stock and extra funds from Trump’s tax cuts drove own capital repurchases sky high. And as long as the practice of capital repurchase existed, people could never stop arguing if this is a good thing or rather something inherently evil. The supporters argue that buybacks are the ultimate manifestation of corporate responsibility – when managers do not see profitable investment opportunity, when it is hard to increase revenue or push efficiencies further, to buy back stock is a responsible thing to do both for own shareholders and the economy in general. For the opponents, buying back own shares is an outrageously unethical maneuver that favors shareholders at the expense of all other stakeholders (1). From the strategic point of view, it also means that companies are neither putting this money into business through CAPEX or R&D, nor retaining it as a financial cushion for when economic downturn strikes.

But perhaps for an investor, moral dilemmas aside, the right question to ask is whether and how buybacks affect the value of the company. Purely mathematically, when a company reduces the number of shares outstanding, each of your share becomes more valuable (reverse dilution effect) and represents a greater percentage of equity in the business. What also happens is that buybacks artificially increase Earnings per Share (EPS), thus making company cheaper according to Price-to-Earnings (PE) ratio. And both outcomes are beneficial for shareholders. 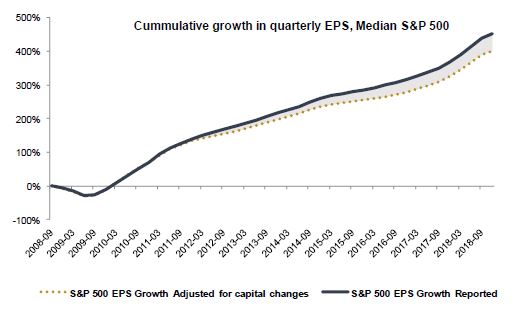 However, studies have also shown (2) that managers often use repurchases of own capital as a tool to meet earnings forecasts (aka manage market expectations) or cash out of their stock holdings, reaping solid profits. To wit, absolute growth in quarterly reported EPS of S&P 500 over the last decade was 452%; adjusted for share capital changes (buybacks or capital issue), this figure stands substantially lower at 401% . The variance kicked off in 2012, when
companies stepped up their buy-back game (Fig.1). 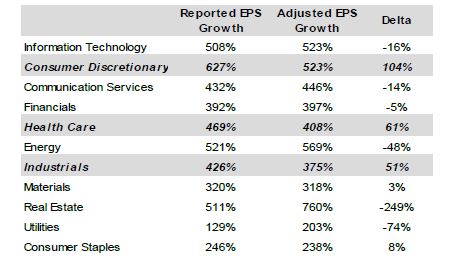 And contrary to common perception that buybacks are especially heavy among IT stocks (ask anyone and they will give you Apple as an ultimate example), over longer term of ten years (Fig.2), these are actually Consumer Discretionary,

Healthcare and Industrials that have the biggest positive cumulative effect on EPS rowth from capital repurchases. Curiously enough, if one looks across the Atlantics, the situation is completely opposite there. European companies in Stoxx 600 issued significantly more stock than they bought back over the same period, thus growth in their adjusted earnings per share actually is better than that of the reported ones (177% vs 166% over 2008-2018 time frame). This striking difference might in part have something to do with the fact that regulation on buybacks in US has been profoundly weak for decades. Back in 1980’s, SEC introduced a “safe harbor” for companies in stock buy-backs and as long as they stick to certain parameters (like not buying more than 25 percent of the Co’s average daily trading volume in a single day), no charges on stock price manipulation could be pressed.

Good news for investors is that buy-backs in US did not come at the expense of the growth in dividend payments: annual payments and payout have steadily increased over time (Fig.3). Therefore, shareholders are eligible for a double bonus – they receive earnings distribution as dividends and end up with a bigger chunk of the company. In 2018 alone, companies in S&P 500 have returned 90% of their net income to the share owners – 41% as dividends and the rest through buybacks. 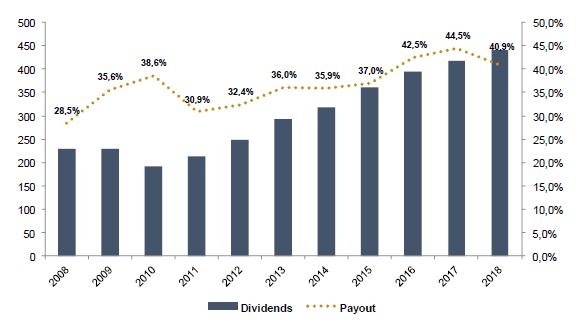 Quality not without a vice, but it still knows better

Given that a bit over a half of American quality companies come from Consumer Discretionary, Healthcare and Industrial sectors – ones that have shown especial love for buybacks, it is not really a surprise they have also enjoyed EPS boost because of that. However, what differentiates quality from the broader market is that despite taking part in popular ‘capital repurchase movement’, they never miss an opportunity to step up their investments in future proprietary growth.

As such, in 2018, when the wave of buybacks hit records, quality companies not only significantly increased their absolute R&D and CAPEX spending, which was way ahead of the general market, but also relative to sales (Fig.4), while broader market actually saw this indicator being squeezed.